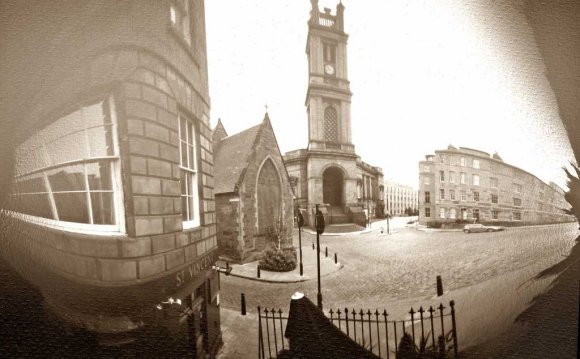 If you were impressed by the interesting results and novelty of a plain old pinhole camera, you'll want to check out these crazy pinhole cameras and their month long exposures.

Basically solarigraphic camera is a pinhole camera, very slow one. These pinhole photographs taken with a lensless pinhole camera with a extra long exposure. I use black&white paper which is 5-10 ASA. Exposure time can be very long, in some photos up to six months. Usually average camera is hidden in city for one to two months. The picture will appear without developing photographic paper with any kind of chemicals. Exposured paper is scanned in darkness and developed in Photoshop. All the cameras are very low tech, cheap boxes, canisters or film cans. This method in is antidope for digital photographic madness. I can take only like 5 pictures in month.

Sun draws many interesting traces in photos, you can really see the time passing by. Some times camera is tilted by passerby or tape just goes loose. Double exposures or traces of humidity can be seen in photos.

The video below showcases photos by Ollipekka:

Slow pinhole photography is definitely the extreme opposite of the instant gratification of snapping a picture on a DSLR and immediately checking it on the LCD screen. The results are also far removed from those you could capture with a digital camera, providing you with a distinctly analog way of recording the life of a location over days, weeks, and months. Check out the link below for additional samples and examples of slow pinhole camera construction—some of the entries aren't in English and some are, but the design of the camera is apparent from the photos.