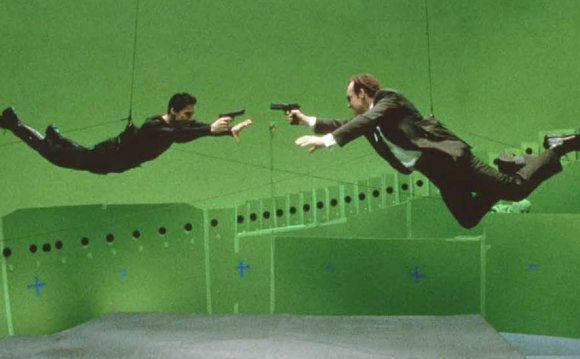 This feature-length cel-animated film about mutated humanoids - a post-apocalyptic, off-beat, adult-oriented rock & roll fantasy from Canada, was the first animated film to use computer graphics, although it was only used in a limited way for a few of the film's images.

The entire animated "Video Game" sequence in this third film in the series enacted a battle between villainous Ross Webster's (Robert Vaughn) "ultimate" supercomputer and superhero Superman (Christopher Reeve), as he flew into a Grand Canyon gorge where the huge supercomputer was located inside a cave.

Webster controlled a 'Space Invaders' style rocket-missile defense system, manipulating joysticks and watching the results on his video screen as numerous missiles were aimed at Superman. The Atari-type game screen displayed the "Score" and the number of rockets remaining.

The sequence was created, one frame at a time, by video game company Atari, Inc. in cooperation with Warner Brothers. It took 3 1/2 months and cost $125, 000 dollars to create. They had planned to base a video game on the sequence, but it never happened.

[Note: They also created the graphics for the "Starfighter" arcade game for The Last Starfighter (1984), but an intended arcade game was never released.]

[These same effects would be replicated 10 years later in Forrest Gump (1994).]

This was the first CGI animation with motion blur effects (using the principles of 'squash and stretch' from traditional animation to produce more fluid and realistic movement in characters).

This was a groundbreaking film - it was the first film to feature the extensive use of CGI - most importantly, the integrated use of photo-realistic, computer-generated (CGI) models for all Gunstar vehicles or spaceships, or planet shots, rather than more traditional miniature models (as in 2001: A Space Odyssey (1968) or ).

This was called digital scene simulation or 'integrated CGI' - the special effects were actually representing real-world objects, and the CG was fully integrated with the...

How to check your computers log files - User history