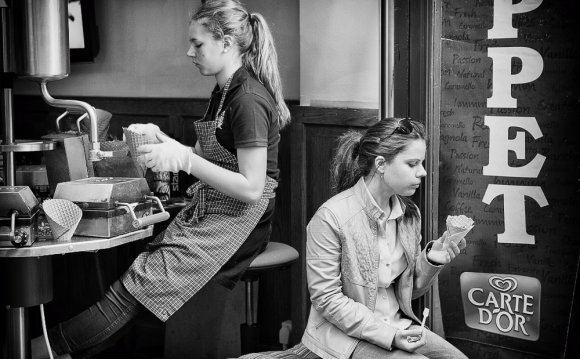 The first major retrospective of Winogrand’s work in 25 years includes more than 175 of his pictures, including some that were previously unprinted, contact sheets, family photographs, magazine spreads and a video of him speaking at a university in 1977. The exhibition, which opened in America before making its way to Paris and now Madrid, is in three sections: early work from New York; images from his travels around America; and later work, from when he moved away from New York.

His raw, often abrasive, sometimes poetic photographs defined post-war America, his subjects including everything from political rallies to zoo animals. In one of his most famous images a teenage girl challenges his lens while a woman tucked in a doorway, mid-kiss, turns her eyes to camera with a smirk. Her partner is oblivious to the narrative.

Winogrand was born in January 1928 in the Bronx. He left school in 1946 and joined the US air force. In 1948 he enrolled at Columbia University to study painting, before taking a photojournalism course, where his passion for photography began. Leo Rubinfien, a curator of the exhibition, wrote in its catalogue that Winogrand ‘sought not to control photography but to submit to it’.

He was obsessive and prolific. It has been suggested that Winogrand took more than a million photographs, and often he did not process the film until years later. His first wife, Adrienne Lubeau, described life with him as like ‘being married to a lens’. He worked as a freelance photojournalist and advertising photographer in the 1950s and 1960s, all the while taking photographs that he would later exhibit at New York’s Museum of Modern Art and publish in books. He was awarded a Guggenheim Fellowship in 1964, and again in 1969 and 1979.

His photographs document a changing America during the 1960s. ‘I photograph to see what the world looks like in photographs, ’ he said. At a Nixon rally in 1960 he met the crowd head on, capturing a bespectacled central character in the claustrophobic group. ‘Photography is about finding out what can happen in the frame, ’ he said. ‘When you put four edges around some facts, you change those facts.’

The History Of Photography In 5 Minutes (And 12 Seconds)