History of Photography for Kids 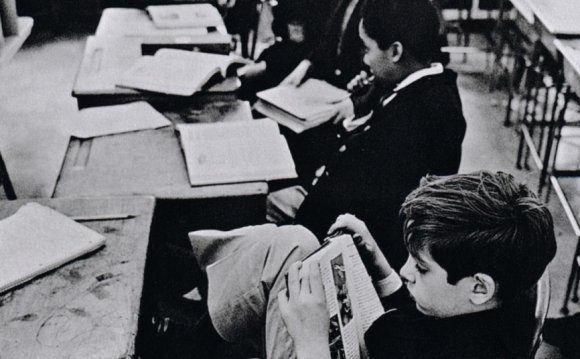 Photography has historically been rare in children's books, but it seems to be gaining in popularity. We had an interesting discussion in the Stephen A. Schwarzman Building about this topic. Panelists included the following photographers: Nina Crews, Joanne Dugan, Susan Kuklin and Charles R. Smith. As it has been for over five years, the Children's Literary Salon was hosted by Betsy Bird, Youth Materials Specialist for BookOps.

Nina Crews is the daughter of picture book author Donald Crews, and they are featured in children's historian Leonard Marcus' book Side by Side: Five Picture Book Teams Go to Work. Joanne Dugan has produced short films. Susan Kuklin rode in the cars of undercover cops for photography gigs, and Charles R. Smith loves to photograph sports and write books about them.

Bird began the discussion by asking the panelists what attracted them to photography. She wanted to know if they started children's books or photography first.

Crews studied painting in college. Photography spoke to her, and she had a great time working with it. Possibilities seemed to abound with photography, and that seemed to be where her voice was. She uses a different voice when she is writing children's books.

Kuklin practiced photography before she started writing books for youth. She wanted to see things and places that she would not otherwise have access to. At one point, she rode with undercover cops and photographed, an assignment that she would not recommend due to safety concerns. The year that she started getting numerous photography jobs, it seemed like every magazine started going bankrupt, including Life, Newsweek, Look (probably due to the Internet). She was distraught, and she wondered if she would ever find work again. Luckily, she was invited to become part of Project Nim, which involved photographing a chimp who was being taught sign language. Once she got started with children's books, she has never looked back.

Dugan has a father who photographed wars. When she was 10 years old, she picked up a camera, and she has never stopped taking photos since. The birth of her son Hugo caused her to search for alphabet books. She was surprised to find that there were no alphabet books correlated with the experience of living in New York City. They would wander and her son would find an amazing A embedded in the sidewalk. After 9/11, like all New Yorkers, she wanted to do something for the community. She decided to do something for the kids of NYC. She created an alphabet book of NYC, ABC NYC: a Book About Seeing New York City. Since no such book yet existed, it was relatively easy to get it published.

Smith joined his school yearbook staff because he needed it to fulfill an elective requirement; he became the sports photographer because he likes sports. He moved to New York City in the dead of winter. He worked as an assistant photographer, and he also took photos as a hobby. He would ask himself what he wanted to take photos of for 25 years. He wondered if any subject he came up with would continue to inspire him. Smith loves basketball, and NYC has a unique subculture which include basketball courts. He put some photos of bball into his portfolio - black-and-white basketball photos. An art director happened to see the photos, and she said that they would be good to include in children's books. He mentioned to her that he was also an author.

Bird mentioned that each of the photos accomplishes something that illustrations could, but perhaps not as well. For example, the photos in ABC NYC give a different flavor to the book. She mentioned that Smith wrote books that have been illustrated by other people. She asked when photos are a better choice than illustration.

Smith said that illustrators can bring to life some things that a photographer cannot. For example, he cannot take a photograph of Muhammad Ali as a child retrospectively. Sometimes, photography is not a practical choice for the subject of a book. This is an easy delineation based on what topics he is writing about.

Dugan's experience with children's books is that they are sometimes "dumbed down." Perhaps the perception in the kid lit world is that illustration is all that kids understand. Photographs are considered to be too sophisticated for children. However, kids have a strong connection to the real world, not simply illustration. Realism is great for kids, and so is the fantasy world that illustration hints at.

Kuklin believes that it is important for kids to see themselves in books. Cultural diversity as well as diversity in body size and physical abilities is vital. The detail in photographs surpasses most illustrations. You do not quite get the same feeling from a drawing of a dancer that you get from a photograph of a real dancer.

Bird mentioned that Kuklin's photographic children's book on trains is the only one that she has seen. Kids love trains, so this befuddled her.

Kuklin stated that there is an assumption that children's books are synonymous with illustration. She knows of a picture book about babies, and they get so excited about seeing other babies.

Bird mentioned that babies love faces, yet there are only a few board books that contain photographs of real people.

A history of Halloween-An Islamic Rhyme (for kids)