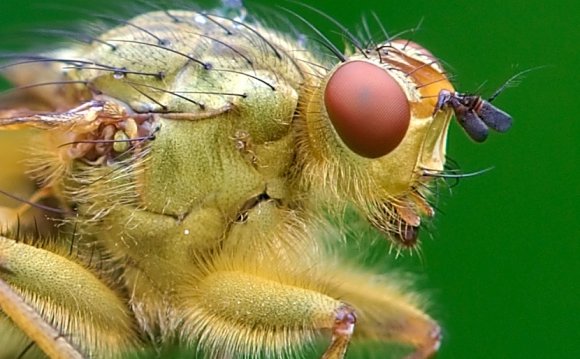 So how do you get close-up photos of subjects that are literally smaller than a grain of rice, let alone get those creepy crawlers to sit still long enough to take their photo? Straight from the expert, here are Alex’s 3 essentials for shooting macro photography.

1. Be genuinely curious about your subject

Alex will tell you that he’s actually more interested in his subjects than the photography itself. That might sound surprising coming from someone who makes a sizeable chunk of his living taking photos, but it actually makes his work that much stronger. “To be a good nature photographer, you first have to be a good natural historian, ” says Alex. “Knowledge and understanding of your subject are key.”

Because of Alex’s science background (he has an MSc. in Biological Photography and Imaging) he can write comprehensive captions for his images.

He’s a stickler for accurate species names and supporting descriptions – and for good reason! “Half the value of these images [to clients and buyers] can be in the associated caption and keywords, ” says Alex. “Often I try to show a biological concept in my photos and the supporting explanation is crucial.”

Beyond just understanding his subjects, the majority of which are teeny-tiny invertebrates, Alex also genuinely cares about their welfare. “I have a responsibility to make sure they don’t get damaged or stressed out. Many invertebrates are fragile and require careful handling. For some of the smaller subjects, I use a fine paintbrush for maneuvering rather than picking them up directly.”

2. Make the flash your best friend

“When I started off in macro photography, I would often get frustrated with the available natural light, ” Alex says. “I still find it very satisfying when natural sunlight provides everything I need to light a macro photograph, but often that’s not the case. There’s rarely enough natural light to photograph tiny subjects with a good depth of field and freeze the movement, and that forced me to understand lighting with a flash.”

Especially because he does a lot of work placing insects on white backgrounds, knowledge and experience shooting with a flash has been critical. For most scenarios, the challenge is to get the light to be as soft and natural as possible, while still avoiding harsh shadows. “Actually, it’s really no different than putting together your typical fashion shoot on a white background, ” he laughs.

First, Alex tapes a piece of your standard white printing paper to where the wall meets his table so that it forms a curve (keep in mind that his subjects are 5mm, not 5ft). Then he clamps his Canon speedlights to laboratory retort stands (which are inevitably always around his lab) for added height, and fits on diffusers that he makes himself with white plastic. Alex also keeps tinfoil and white card handy to create reflectors, helping bounce light back onto the subject to soften the shadows.

Then Alex sets up his Canon 5D Mark II on a macro focusing rail with his go-to lenses – the Canon EF 100mm and Canon MP-E 65mm macro lenses.

He then carefully adjusts the power of the flash units so that a clean white background is produced whilst preserving intimate details of the insect. “Often, I like to leave a shadow under the subject as it echoes its delicate shape and gives a sense of orientation. By moving a small reflector closer or further from the subject, I can control how dark the shadow appears. If I want to remove the shadow all together, I just position a flashgun underneath the paper that the subject is sitting on.”

Many of the white background images are ready to go straight off the camera, although on occasion some post-production can help remove any small blemishes on the background and ensure that the image has a good contrast. “It’s a nice simple workflow if you get the flash power right, ” he says.