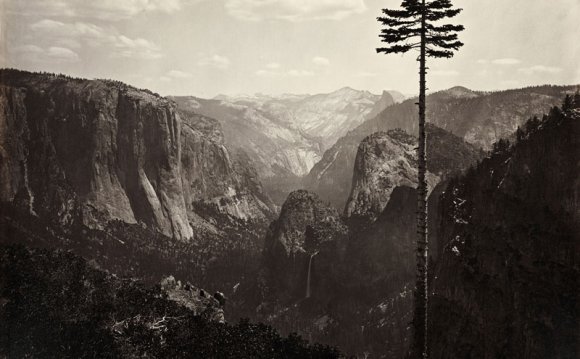 Roots in Antiquity
Artists have been painting the landscape since ancient times. The Greeks and Romans created wall paintings of landscapes and gardenscapes. After the fall of the Roman Empire, the tradition of depicting pure landscapes declined, and the landscape was seen only as a setting for religious and figural scenes. This tradition continued until the 16th century when artists began to view the landscape as a subject in its own right. The artistic shift seems to have corresponded to a growing interest in the natural world sparked by the Renaissance.

Rise of the Landscape in the Netherlands
The term "landscape" actually derives from the Dutch word landschap, which originally meant "region, tract of land" but acquired the artistic connotation, "a picture depicting scenery on land" in the early 1500s (American Heritage Dictionary, 2000). The development of the term in the Netherlands at this time was logical because the Netherlands was one of the first places that landscape had become a popular subject for painting. At this time, the rising Protestant middle class sought secular art for their homes, creating the need for new subjects to meet their tastes; landscapes helped fill this need.

Outside of the Netherlands, the genre, or subject, of landscape painting had yet to gain acceptance with the powerful art academies of Italy and France. The hierarchy of respectable painting subjects placed history painting, which included classical, religious, mythological and allegorical themes, above all other subjects. Portraits, genre (scenes of everyday life), still life, and landscapes were seen as inferior subjects for painting. Even as landscapes became acceptable as subjects in the 17th century, they were still often created merely as settings for biblical, mythological, or historical scenes.

Birth of the Classical Landscape
In the 17th century the landscape was born. These landscapes were influenced by and sought to illustrate an ideal landscape recalling Arcadia, a legendary place in ancient Greece known for its quiet pastoral beauty. The Roman poet had described Arcadia as the home of pastoral simplicity. In a classical landscape the positioning of objects was contrived; every tree, rock, or animal was carefully placed to present a harmonious, balanced, and timeless mood. The classical landscape was perfected by French artists Nicolas Poussin and Claude Lorrain. Both artists spent most of their careers in Rome drawing inspiration from the Roman countryside. Italy, at this time, was the preferred location for many artists, who often traveled there with patrons on the Grand Tour. (Learn more in the presentation on this Web site from the past exhibition Italy on the Grand Tour.) Poussin, who in his early years focused his talent on history painting, came later in life to believe that landscapes could express the same powerful emotions as the human dramas depicted in history paintings. From that point on, he worked to elevate landscape to a higher status.

During the 18th century, Italy continued to be a popular source of inspiration for landscape artists, as the Grand Tour's popularity increased and peaked in the later half of the century. France and England became the new centers of landscape art, although the ideals of 17th-century Dutch and Italian landscapes—including the classical model—retained popularity. While landscapes were often commissioned by patrons, the subject remained low in the hierarchy of the academies, particularly at the in France—an incredibly powerful lorganization that set the standards for what was taught and exhibited in the nation.

Among them was Jean-Baptiste-Camille Corot, who was heavily influenced by the historic landscapes of Valenciennes and by his own travels in Italy.

The Modern Landscape
The 19th century held many milestones for the history of landscape art. As the Industrial Revolution altered the traditions of rural life, the old hierarchy of subjects crumbled. Throughout Europe and North America landscape painting gained a new supremacy. painters such as Théodore Rousseau and Charles Daubigny became less concerned with idealized, classical landscapes and focused more on painting out-of-doors directly from nature—a practice known as . The 19th century also saw the birth of landscape photography, which would greatly influence the landscape painters' compositional choices. Revolutionary artists emerged, such as Gustave Courbet, who pushed the boundaries of landscape painting even further by making it both a tactile and visual experience. Courbet's radical painting techniques and independent spirit paved the way for the next generation of painters to break from the Academy—the Impressionists. The Impressionists, comprised of artists including Claude Monet, Camille Pissarro, Auguste Renoir, and Alfred Sisley, would devote most of their careers to studying and painting the landscape, working most often out-of-doors. The influence of Courbet's distinct use of paint and the way he structured his landscape views extended well beyond, deeply impacting the work of Cézanne and Van Gogh, as well as painters in the 20th century.