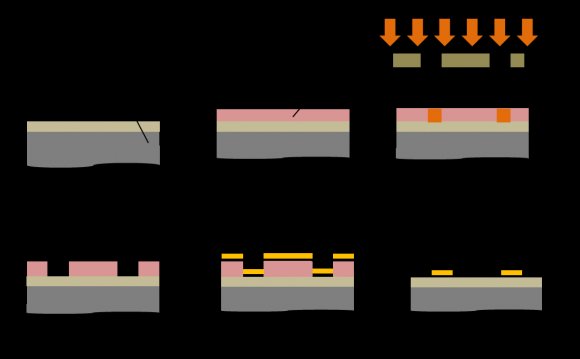 Angela Young describes the background of photolithography and shows, step by step how to make a print.

Alois Senefelder invented the printmaking process of lithography in 1798. From its beginning, according to the College of Technology’s Digital Media Program’s article The History of Lithography, it has become one of the largest industries in the United States – a part of the Printing Industry, which is the third largest manufacturing industry in the United States.

Alois Senefelder started out his career as a successful playwright. Several of his works were published; however, he found it expensive to reproduce copies of his plays. In an attempt to reduce the publication cost, he tried to produce his own copperplate engravings. In the late 1700s copper plates were mostly used in printing, but it was a difficult process to create images and text to be printed in reverse (Jezek 1). In order to reduce cost and time, Senefelder decided to practice his engraving on slabs on Bavarian limestone instead of expensive copper. To correct mistakes made on the limestone, he found that a mixture of wax, soap, lamp-black and rainwater were efficient (The History of Lithography 1).

Through experimentation, Senefelder discovered that when he drew on the limestone with the correction fluid, the drawn image would repel water, while the surface of the stone where no image was drawn would hold water.

(The History of Lithography 1). The stone itself, which held water, would repel the ink, and the correction fluid, which is greasy and repels water, would accept more ink. Since lithography is based on a chemical principal, Senefelder decided the call the process chemical printing.