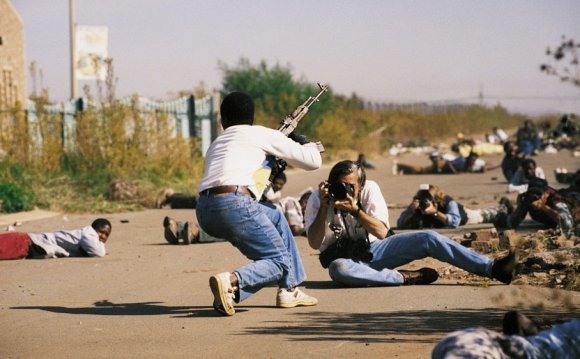 The dilemma isn’t unique to journalists, he adds, it applies equally to medics, aid workers and anyone else who feels compelled to work in dangerous places because they believe they can make a difference. ‘I wanted to ask how you cope with that, when you have a family. And what price is paid not just by you, but by the people around you.’

At first Poppe saw it as a Scandinavian film, but once it became clear that it would be easier to finance if it were in English, he decided to pursue Binoche for the lead. She has never made a secret of her aversion to celebrity gossip, suing French magazines for invading her privacy and gaining a reputation for being evasive in interviews. But she has also long been a vocal supporter of Reporters Without Borders, a non-profit organisation that campaigns for freedom of information, and against the imprisonment and intimidation of journalists worldwide. Along with her support of human rights in countries such as Iran, this seemed to make her a good fit. ‘I was touched by the story, ’ she says. ‘Even though the script wasn’t totally there yet when I first read it, I felt it was compelling.’

Binoche and Canny walk together on set. PHOTO: Marcus Bleasdale

We meet in the bar at Claridge’s in London. Binoche has come over from Paris to do the interview because, she explains, this is a film she wants to support. She looks effortlessly chic in dark jeans and a beautifully cut soft leather biker’s jacket, her hair short and spiky, her face adorned with only the most minimal of make-up. She has just come back from Chile, where she was filming The 33, about the 33 miners who were trapped underground for 69 days in 2010 (Antonio Banderas, Martin Sheen and Gabriel Byrne also feature). It was a good trip, she says, because her 20-year-old son, Raphaël, who is now at art school, was able to visit, and they went to the Alma and Paranal observatories together. ‘Seeing the stars in the sky was a life experience, ’ she says. ‘I felt so lucky, I wasn’t shooting for a day, so I was able spend time somewhere I wouldn’t have gone normally.’

She loves to travel. When she was 16 she hitchhiked around Poland during the Solidarity uprising, to discover her roots (her maternal grandparents were Polish). She has walked to Machu Picchu, seen glaciers in Patagonia, and recently had a three-week break with friends in Antarctica. She has somehow combined this with a prolific acting career and bringing up two children. She has never publicly named the fathers of her children, but Raphaël’s father is usually reported to be André Halle, a professional scuba diver whom she met during the troubled three-year shoot of her 1991 film Les Amants du Pont-Neuf. Her daughter, Hana, 14, is said to be by Benoît Magimel, her co-star in the 1999 film Les Enfants du Siècle.

‘Even though the script wasn’t totally there yet when I first read it, I felt it was compelling, ’ says Binoche of A Thousand Times Good Night. PHOTO: Marcus Bleasdale

‘The way I resolved it at the beginning was to take my children wherever I was going, until my daughter was six, and her father didn’t want me to take her with me. Then, when my son was 10, I thought I had to ask him if he wanted to travel around with me, or whether he’d like to stay at home with his father, his friends and his normal activities – and he wanted to stay at home, mostly.’

Now, both of the children enjoy coming to see her when she is away, but she struggles with guilt, as all mothers do. ‘I think it's necessary to work, to be happy and participate in the world. It’s what we’re here for. Yet we also have to give [our children] time and attention, of course.’

Her own childhood was difficult. Her parents split up when she was four, and she and her older sister, Marion, were packed off to boarding school. She was unhappy there and has often said that acting was a way of replacing the family she felt she lacked as a child. At the age of 15 she decided to complete her education at a school specialising in drama, moving to Paris, where she lived with her sister, who was then 17. ‘It was so exciting, coming from a provincial place in the countryside to the big city where there was theatre and I could go to the museums, ’ she says. ‘But it was tough – we had to do our own shopping, cooking and cleaning.’

But she finished school and took drama classes at night, working as a cashier in a department store to get by. Her mother, a drama teacher, couldn’t afford to help out, and her father, a director of masked theatre, had gone to live in Colombia. ‘I was lucky to have a very nice first boyfriend!’ she says, laughing. She managed to get a few theatre parts, a couple of days’ shooting on some TV dramas, then small roles in films, including Hail Mary with Jean-Luc Godard, before finally getting a break in 1985 with Rendez-vous, which won the Best Director award at Cannes for André Téchiné.

Even then, she says, she almost gave up after doing three difficult films in a row in her 20s: as well as Les Amants du Pont-Neuf, for which she slept rough in order to prepare for her part as a homeless young artist, there was conflict on-set for both Damage and Wuthering Heights, English-language films that received mixed reviews but established her international reputation. It was only her drama teacher’s belief in her that stopped her from quitting. ‘I said acting is not for me – it’s too hard!’

When she won an Oscar for The English Patient in 1997, she was genuinely surprised, and ended up giving the statue to her young son to play with. He loved it, she says, until the gold started to peel off. ‘Scratch a little bit, no gold any more!’ she says with a laugh, fully aware of the irony. Eventually her American publicist got her a replacement, which she kept more carefully. ‘I learnt my lesson!’

Still, she has never seemed seduced by Hollywood glitter. She tends to follow commercial hits with interesting independent films, or low-paid but creatively stimulating theatre productions. In 2008, at the age of 43, she spent four months learning to dance with Akram Khan before performing alongside him in IN-I, a production that opened at the National Theatre in London before setting out on a two-year world tour. ‘I came to that sort of by accident, ’ she says with a shrug. Her masseuse said she should dance and introduced her to Khan’s producer, ‘Then it all snowballed into this crazy idea of doing a collaboration.’

She likes ‘to go somewhere new’ she says, and fear is what tends to tell her she’s on the right track: she likes to feel scared about what’s coming up. ‘You have to go back to the root when you act, and from there you can create a character. Otherwise it doesn’t work, it comes from nowhere.’

I ask how the work has changed as she has got older, and she says she has found herself working increasingly with women. Her next film is with the Spanish director Isabel Coixet in Norway; after that, she’s off to Sicily to shoot a film directed by her son’s girlfriend. She makes no attempt to hide her 50 years. In A Thousand Times Good Night she wears little make-up, and the natural light shows every line – and she looks wonderful for it, with a face that is alive and full of expression. And she’s certainly showing no signs of slowing down.

McCullin: A Documentary Film About the Iconic War Photographer